Explore our past theatrical shows

Presenting Night Flight’s 9th Annual FRIGHT NIGHT – A Halloween Circus! This year we are thrilled to transport our audience to a witch’s coming of age.

Agatha the witch just wants to pass her final exam for Mx. Morgan’s School of Magic and Domination. But her text book is soggy, her wand is broken and the weird sisters keep stealing her ideas. Not to mention it is Halloween Night and vampires, wolves and those creepy girls from Salem won’t let her study in peace. Will she be able to find her magic and summon a creature from the unseelie realm in order to graduate on time? Or will she have to sign up for summer school again?

Featuring world class circus arts, Night Flight’s FRIGHT NIGHT is a Halloween tradition not to be missed. Now in it’s 9th year, FRIGHT NIGHT consistently delivers gorgeous aerial and acrobatics with a delightfully spooky and sexy story. After selling out all five shows in 2018, we are moving FRIGHT NIGHT to Lincoln Hall for a bigger stage, bigger acts and bigger thills! 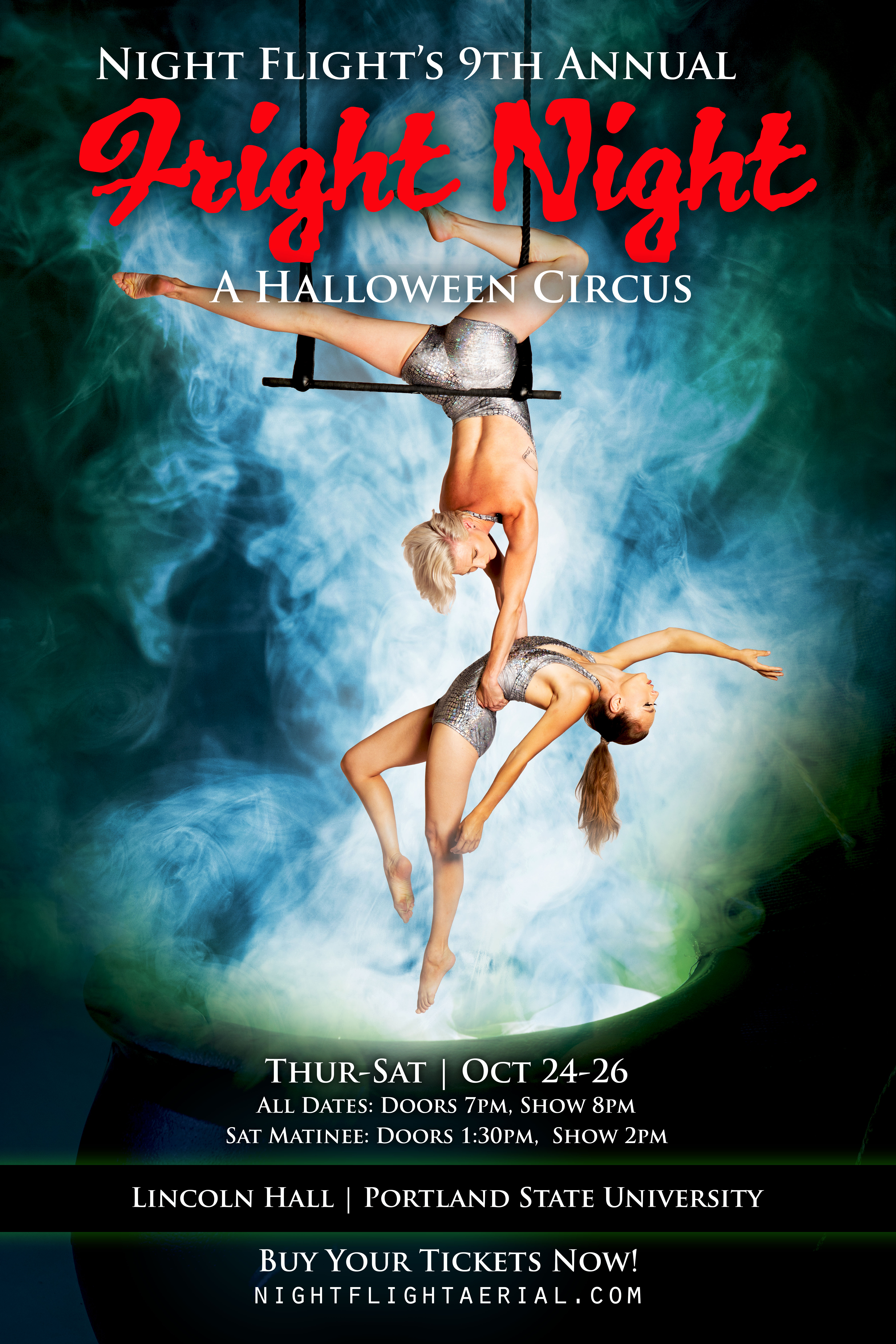 This year we are thrilled to announce that Fright Night will be accompanied by the gorgeous live music of Fever, whose music is as sexy as their name suggests. Fever blends haunting and sultry blues ballads with witchy Latin pop and cabaret fusion to create a truly unique sound that is always unforgettable.

Travel with us to a dark circus haunt in a forgotten corner of New Orleans. This Halloween the barrier between worlds has grown thin. A sudden wind shakes the shutters, the band starts to play and in stride two demons ready to start a ruckus. Featuring a contorting centipede both lovely and grotesque, devilish creatures of the night performing a wild dance on Chinese pole, and bioluminescent fireflies spinning high above on duo trapeze, this year’s show promises to be a sexy and gory adventure for the senses! 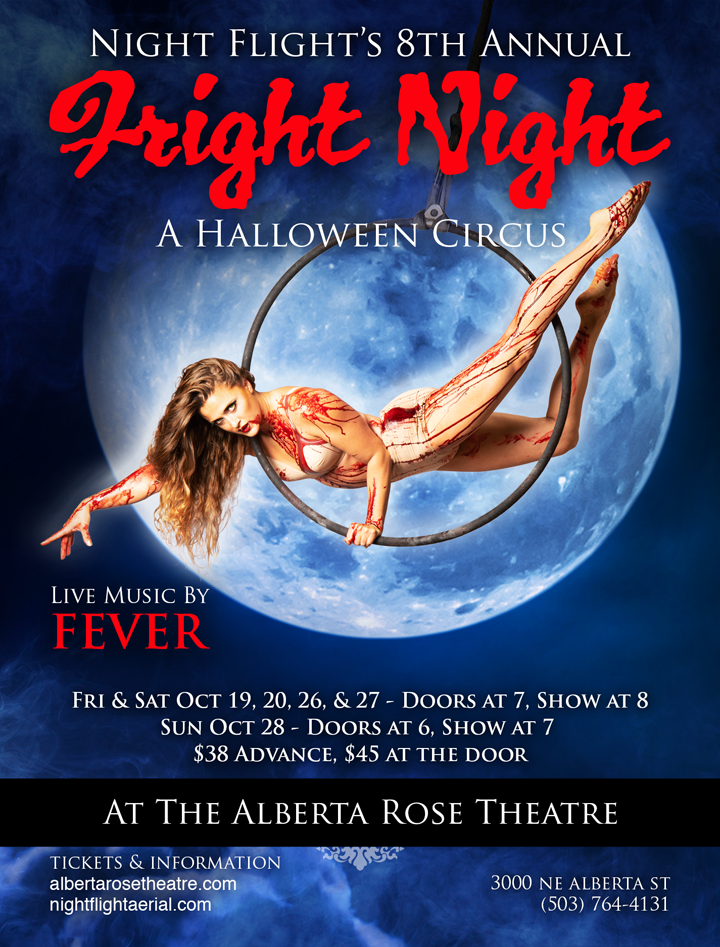 Night Flight is proud to present their 7th annual Fright Night – A Halloween Circus. Journey back in time to a haunted forest where a kindly old lady waits patiently for trick or treaters, but instead she is faced with goblins swinging on the aerial silks, black light skeletons dancing past, a ghost spinning on the trapeze and fairy royalty twirling on the aerial straps. Night Flight is pleased to partner with world class clown Michael O’Neill of Clowns without Borders. Featuring brand new acts, story, and a never before seen apparatus, Fright Night runs for only two weekends this October. Get your tickets now before they disappear! 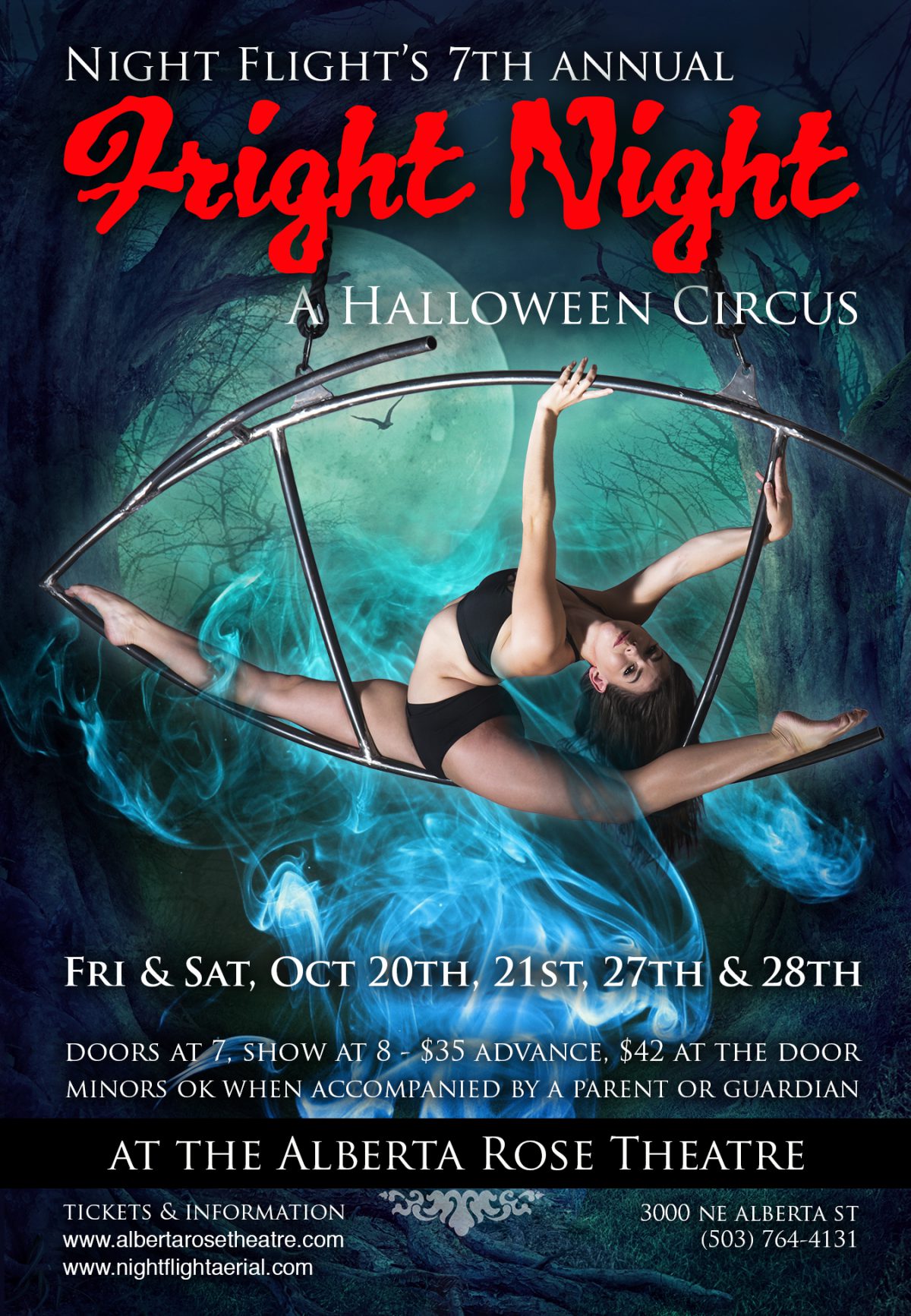 Night Flight is thrilled to present our 6th Annual Fright Night – A Halloween Circus! Michael O’Neill, from ‘Clowns without Borders,’ joins our fantastic circus artists for a deliciously spooky treat! This year’s show features never before seen circus acts and an original storyline. You will be enthralled by a monster and his bride on straps, captivated by the tale of a moth caught in a spider’s web, and bewitched by a witches spell unleashing evil spirits on the aerial silks. Come watch as bats fly through the night, spooky scarecrows come to life, and zombies loosen their limbs in a contorting dance macabre. 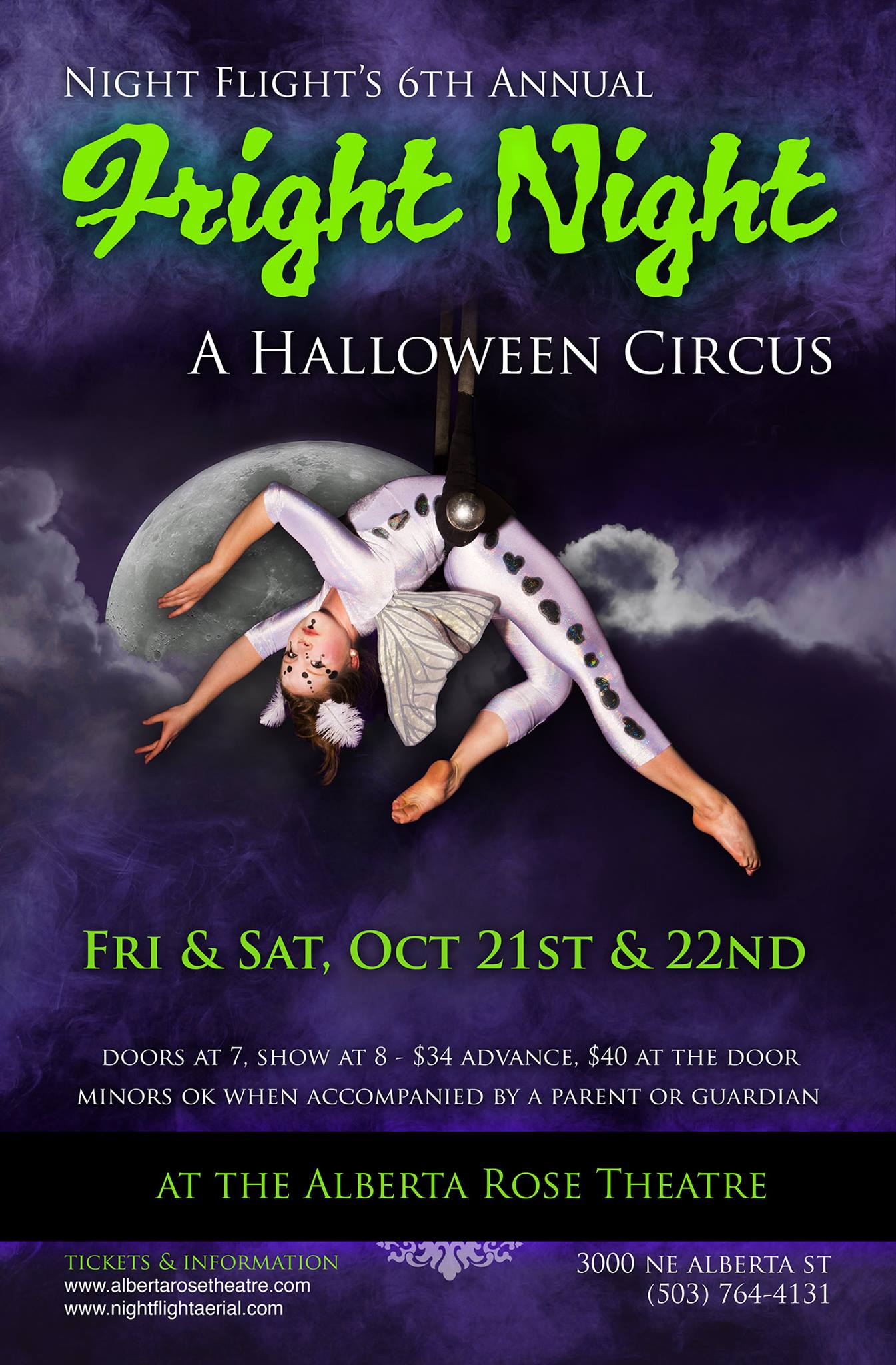 Night Flight is excited to present our 5th Annual FRIGHT NIGHT – A Halloween Circus. Night Flight aerial and circus artists and Michael O’Neil from ‘Clown without Borders’ are coming together at the Alberta Rose Theatre this October for a diabolical night of high-flying ghosts, harrowing high wire harlots and ghoulish dancing goblins. This will be a night so good it will give you chills! 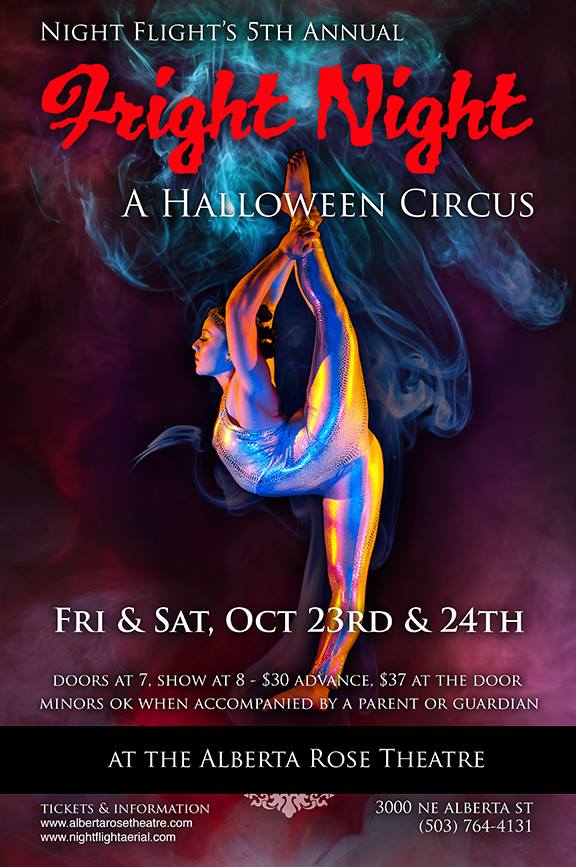 Inside the Carnival your dreams await! Step right up, skip the fine print, and then sign on the dotted line. Night Flight is excited to present ‘A Midnight Carnival’ created in collaboration with the brilliant comedians and vocalists from the Hungry Opera Machine.

Join zanies Faustidiata the Rat, Ivan the Mouse, and a cast of beautiful and mysterious acrobats, aerialists, and dancers as they unravel the dark secrets behind the hottest ticket on the midway. Let us sing, fly, bend, and tumble you into a world of magic and the unexpected…this show is sure to bring out the devil in you! 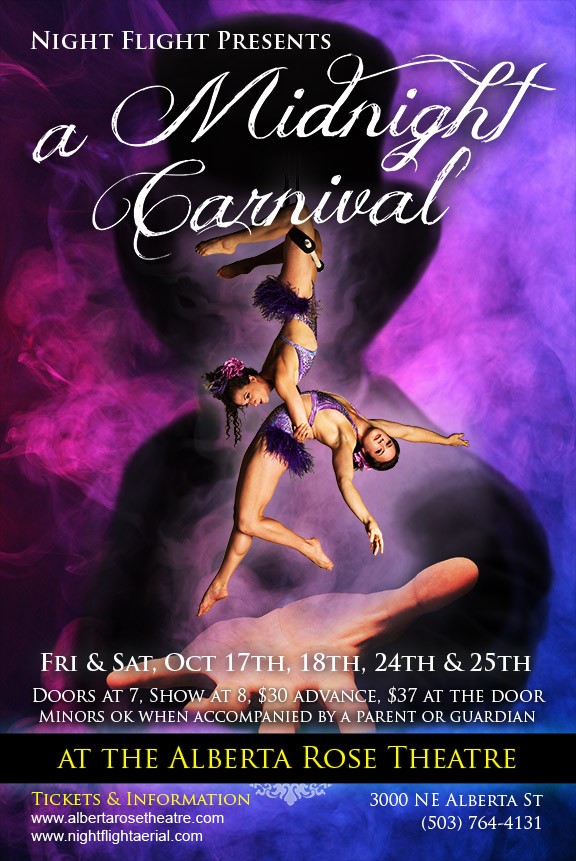 As the days grow short and the nights deepen, the season of mystery, magic, and mayhem is upon us. Join the highflying daredevils of Night Flight as they swing and soar their way through this years Fright Night – A Halloween Circus. Follow Igor as he guides you on an imaginative and hilarious journey through a haunted castle, dripping with witches, ghouls, snakes, magic potions, and romance.

This year’s Fright Night features an new original story that follows a couples “romantic” getaway in a haunted manor. Presenting new spellbinding acts and some returning favorites, and guest starring the beautiful Tanya Brno from Seattle, this year’s show will surprise and delight you. We promise to leave you rolling in the aisles.

Be you bold or easy to scare we wait with baited breath to welcome you…and serve you…we know you’ll be delicious! 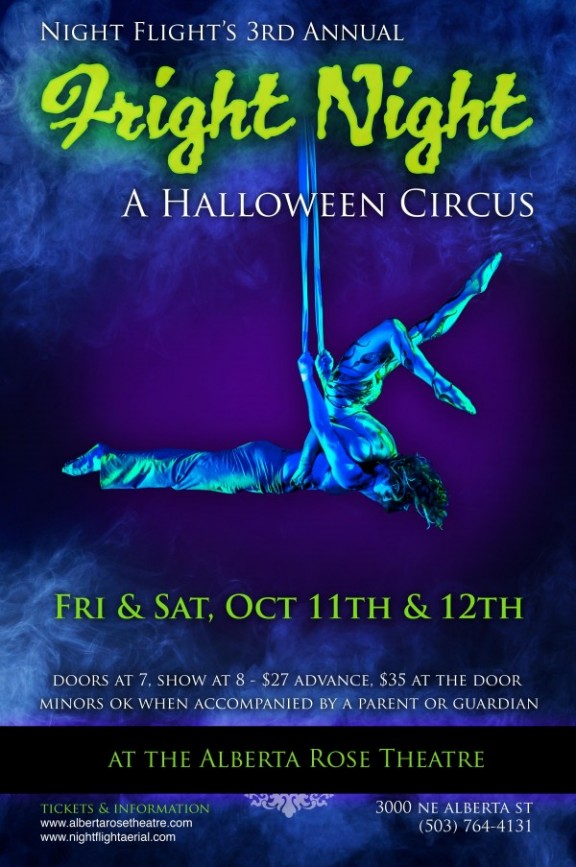 Tighten your corset, and buckle your swash as the flying pirates of Night Flight take you on a whimsical journey beneath the waves! Here mystical mermaids twirl in aerial nets, electrifying eels slither above you in a kelp forest, and shimmering lobster girls dance to the fiddler of the deep. All manner of alluring and treacherous creatures await you! Reserve your berth early, for a host of drowned sailors seek these lost treasure of…the Sea of Dreams.

Get ready to hoist your sails and heave anchor, this undersea adventure dives below July 26th and 27th, making port at the Alberta Rose Theater. 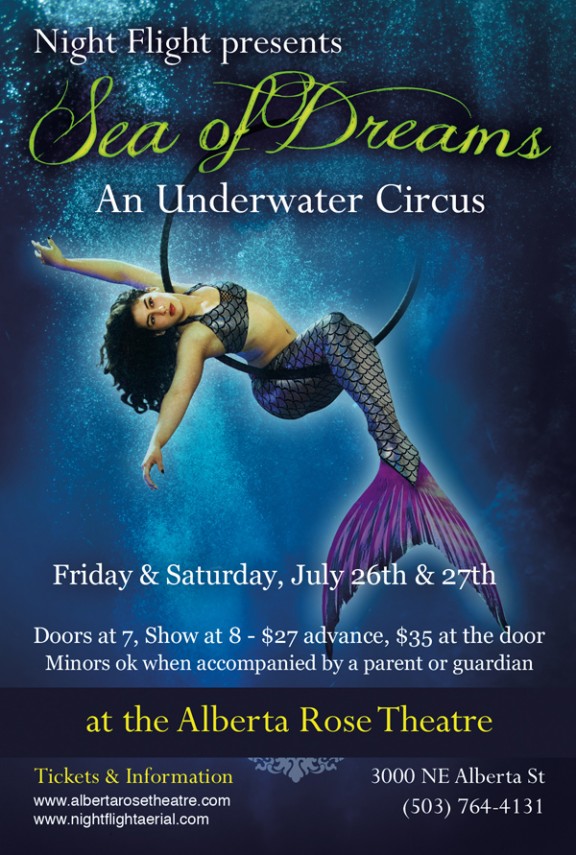 Night Flight aerial artists and Eric Stern of Vagabond Opera come together at the Alberta Rose for a diabolical night of high-flying witches, harrowing high wire harlots and ghoulish dancing goblins. This will be a night so good it will give you chills!

BE PORTLAND’s Review of Night Flight’s 2nd Annual FRIGHT NIGHT:
“Suspended twenty feet in the air, a pair of skeletons contort their bodies within a steel prism above a crowd of awe stricken audience members watching in silent admiration. They dangle there for a few moments with their heads aimed towards the ground below before swinging their bodies around each other and through the prism in a series of carefully choreographed maneuvers that make the audience bust out in whistles of approval and cheers of amazement.

This was the scene Saturday night at the Alberta Rose Theatre as Portland aerial acrobatic troupe Night Flights performed their second annual presentation of Fright Night: A Halloween Circus, to a sold out crowd. The theatre was packed with an awestruck audience as they watched amazing feats performed by a truly impressive group of daring acrobats that not only kept the crowds necks craned towards the ceiling to watch as the performers swung from trapezes and dangled above the ground from chains but also kept them laughing the entire night . . .” -John Rosales [Be Portland] READ MORE 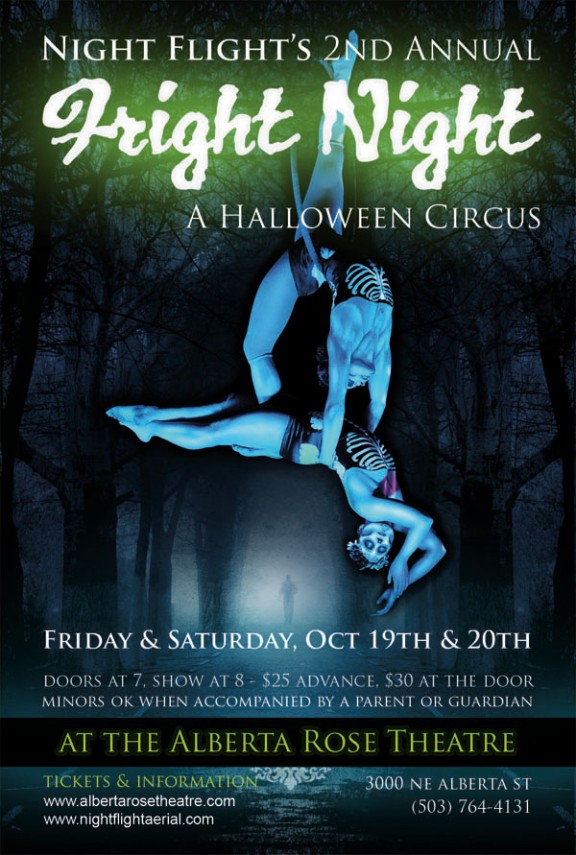 Night Flight presents ‘La Luna’ – A Moonlight Circus, is a magical evening of aerial imaginings and dreamlike acrobatics set in a bedroom a night.

The audience will find themselves immersed in the dreams of Vagabond Opera’s Eric Stern as he struggles to process the waking world. Featuring new and original acts by Portland’s professional aerialists and acrobats, and accompanied by the seductive live music of the band Fever, La Luna will transport the audience through flights of fancy, moments of inspirational joy, mischievous encounters, twisted and haunted spaces, and the tenderness of love.

As sexy as their name suggests, Fever blends haunting and sultry blues ballads with witchy latin pop and cabaret sludge to create a truly unique sound that is nigh unclassifiable and always unforgettable. 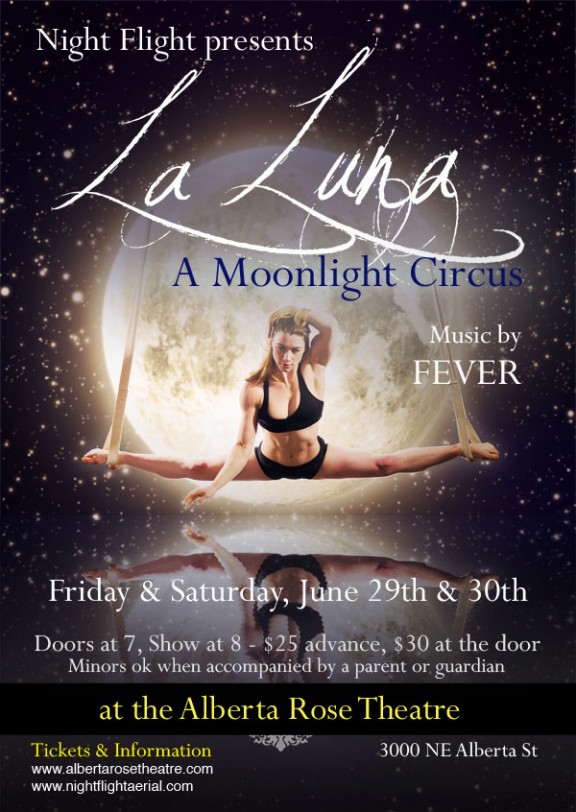 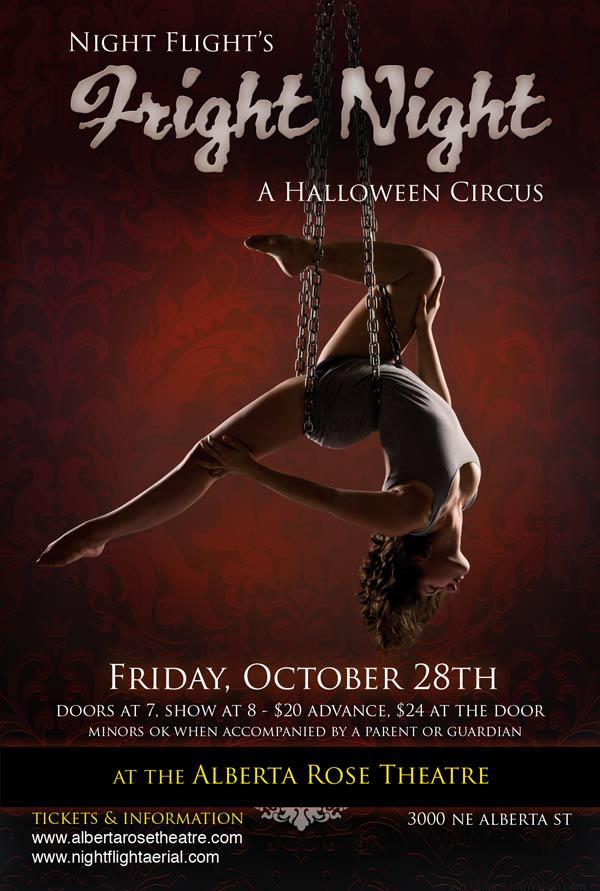