Night Flight is a performance company based in Portland, OR. We produce big, colorful, beautiful shows that combine breathtaking aerial artistry and playful storytelling. We are extremely passionate about what we do and we believe whole heartedly that love is in the details. Aside from our shows, we are also an Aerial and Circus Arts Studio and teach Series and Drop-in classes. Our Series include classes in trapeze, silks, lyra, rope, straps, handstands, stretching and contortion. As teachers, we are dedicated to creating fun, safe and challenging classes that focus on individualized attention. We are invested in our students and helping them reach their goals. 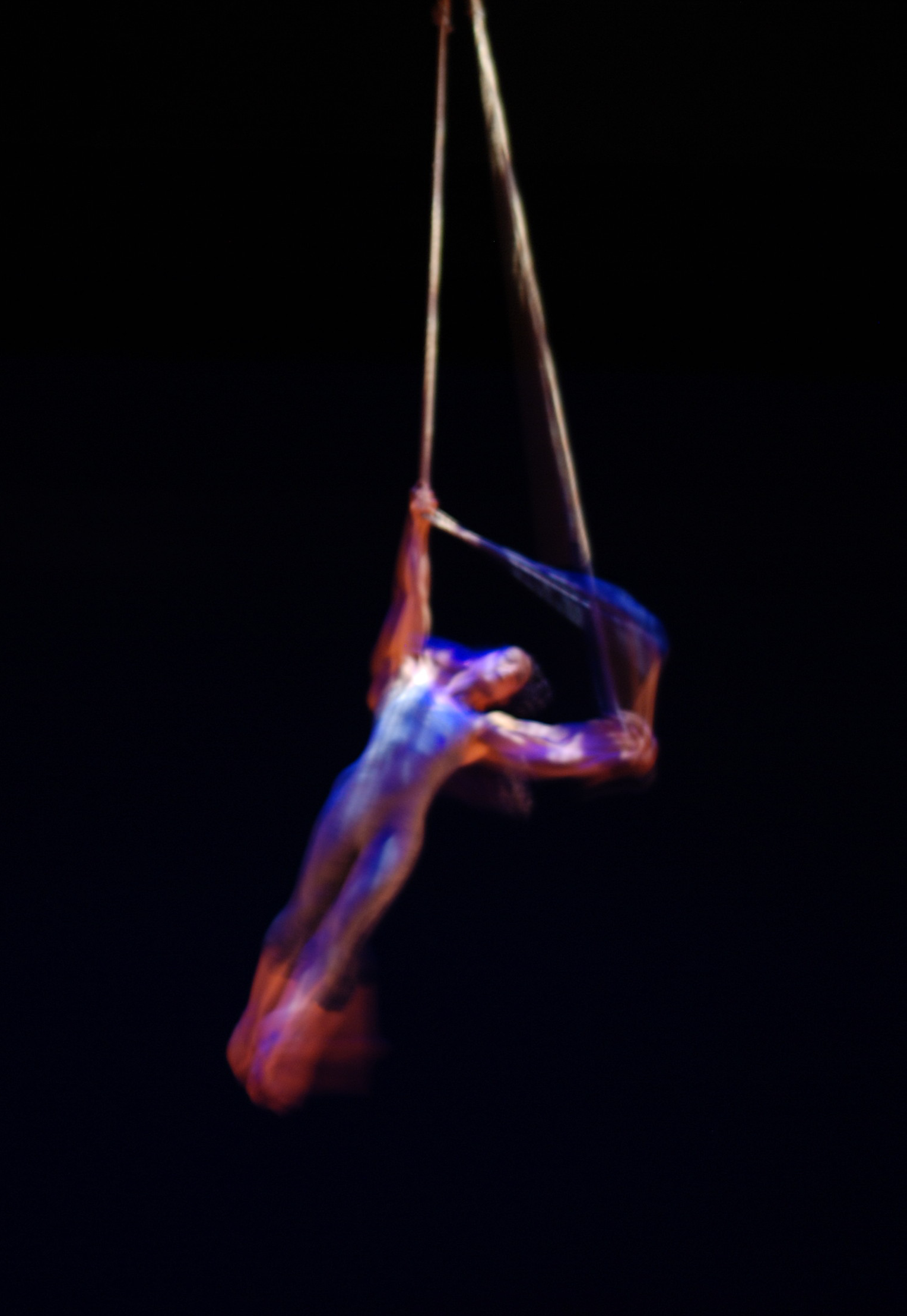 After teaching and performing with Do Jump! for 12 years, Daniela moved to the Bay Area, where she worked as a circus coach at the San Francisco Circus Center. While in San Francisco, Daniela co-founded Sweet Can Circus and performed in Teatro ZinZanni’s Cabaret Lunatique. Now back in Portland, Daniela performs with Night Flight, Circus Artemis, Curious Comedy, Pelu Teatre, and Nomadic Theatre Company. Other Northwest aerial instructing credits include the School of Acrobatics and New Circus Arts in Seattle and the Circus Project. 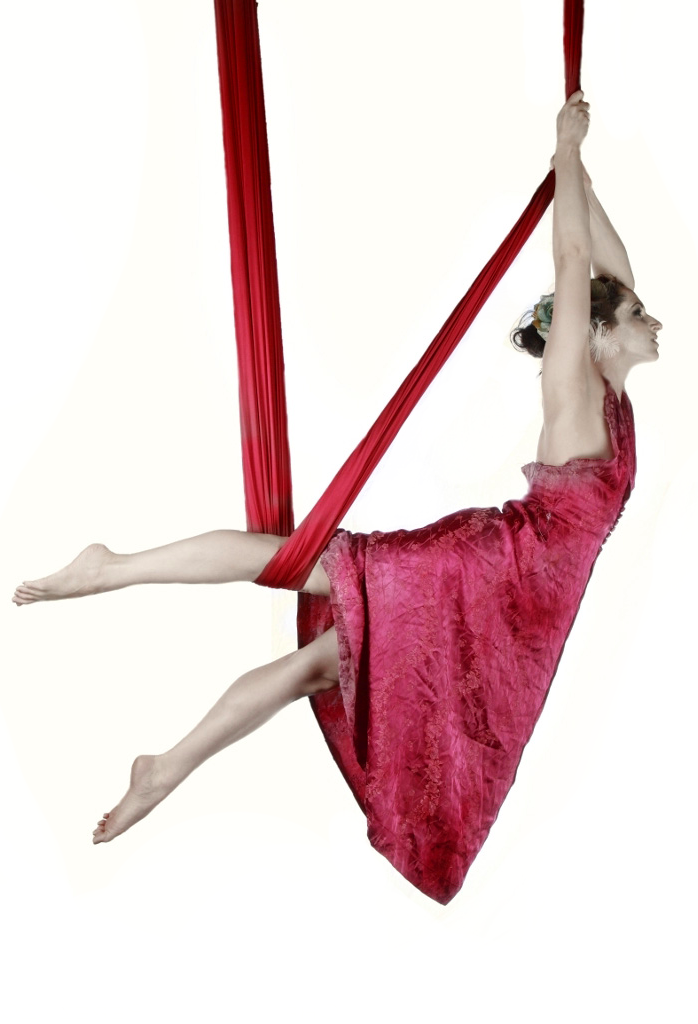 Stephanie began flying through the air in 2002 in a small aerial class taught by Lara Paxton of Circus Contraption. There she meet her aerial partner Gemma in her very first class. In 2006, She moved to Los Angeles to train with Sarah and Karen Steben. Stephanie has performed with the Aerialistas, as a duo with Gemma Adams and independently. Stephanie is one of the founders and owners of Night Flight. She bring’s her experience and love of aerial to the students of Night Flight. 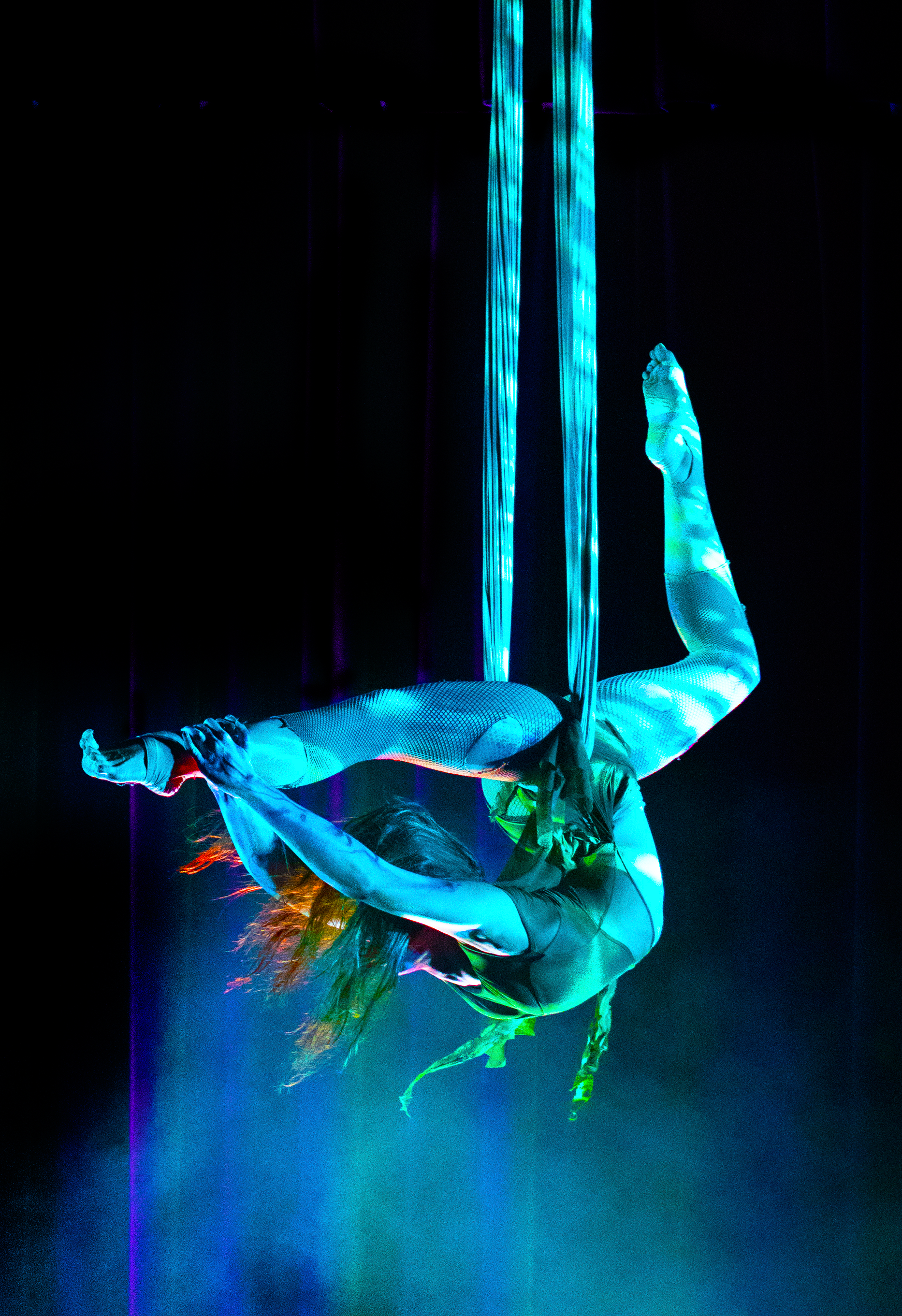 Growing up, Treya explored the performing arts through dance, gymnastics, and theater, but nothing ever stuck quite like aerial. Aerial has become a main focus in her life since her introduction to Night Flight in 2012. Treya now performs with Night Flight Aerial, Super Geek League, Aerial Muse Collective, and is a founder and co-owner of Savory Events. Treya's main focuses are grace and flexibility on lyra and silks. She is passionate about sharing her knowledge with other like-minded individuals and finds joy in helping students grow.

Gemma has sixteen years of experience in aerial and circus arts. Gemma first began her aerial training in 2002 with Lara Paxton, from Circus Contraption, and later with Sarah and Karen Steben. She has performed with Seattle’s aerial troupe The Aerialistas, as a duo with Stephanie Lopes and independently. In 2004, Gemma earned a certificate in Physical Theater and Circus Arts from Circomedia in Bristol, England. She is also one of the owner/founders of Night Flight. 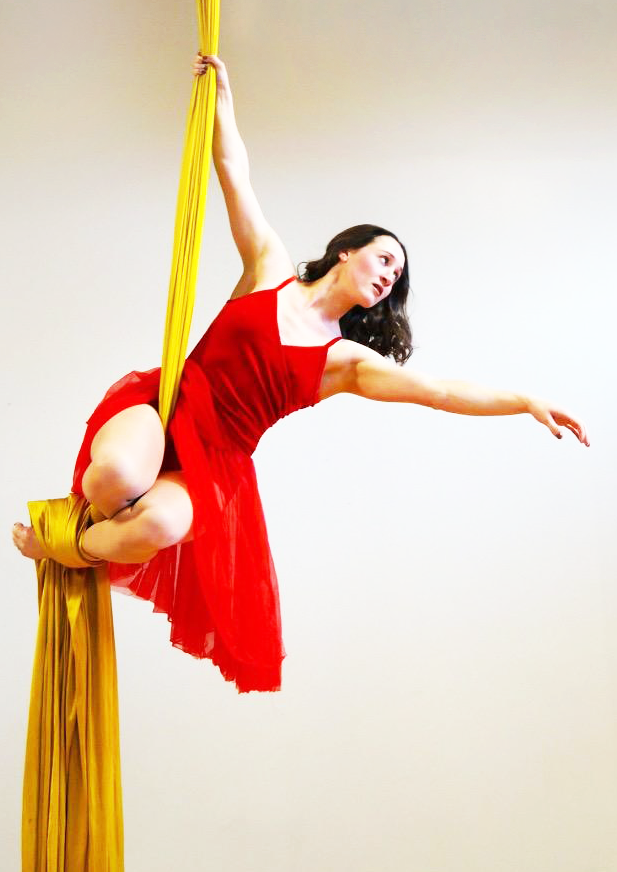 Jessie has over 13 years experience training, performing and teaching aerial arts around the country. She focuses primarily on aerial tissue but can also be seen on rope, lyra and duo trapeze. As a coach, Jessie specializes in training advanced student on vertical apparatuses and enjoys helping them increase strength and endurance, improve technique and discover a passion for performing. 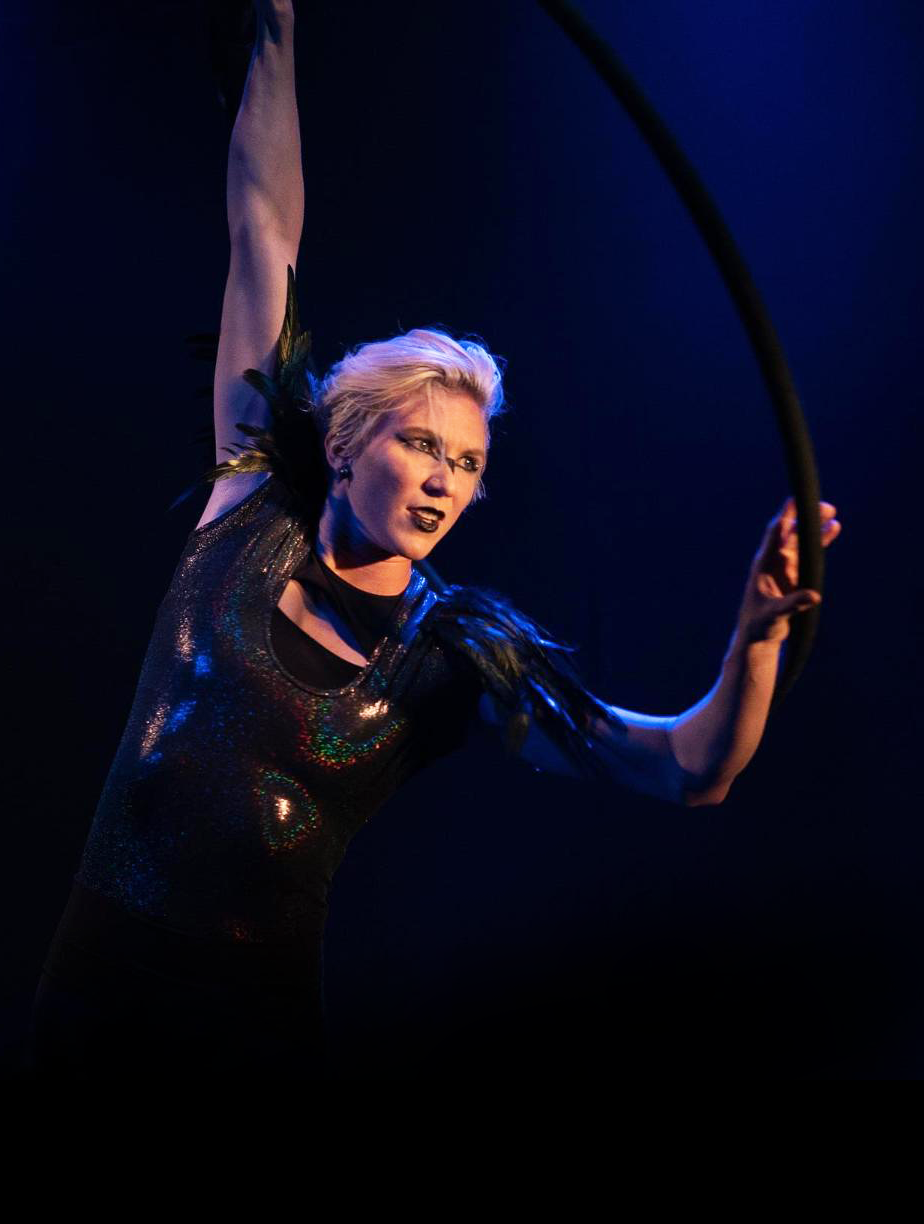 As an endurance athlete, storytelling performer, and music event producer, Bentley’s background is as diverse as their multifaceted identity. Bentley has been performing aerial since 2015 with a primary focus on lyra and trapeze. Bentley specializes in duo work: they find immense joy in creating acts with their partners that showcase the complexity of human connection, intimacy, and vulnerability. Bentley comes to Night Flight with a wealth of experience in collaborative development and facilitative coaching. They delight in elevating others to reach their goals.

Larke has been performing and creating theatre since she was a child in Missoula, Montana. After receiving a BFA in Playwriting from NYU, Larke moved to Portland where she discovered aerial and Night Flight and became immediately hooked. She has been performing aerial since 2012. As a trapeze instructor, Larke loves helping her students develop kinesthetic awareness and develop a deeper connection with their body all while learning how to do something amazing. As an theatrical performer, Larke loves all parts of the theatrical process from writing, directing and coaching to performing and stage handing. 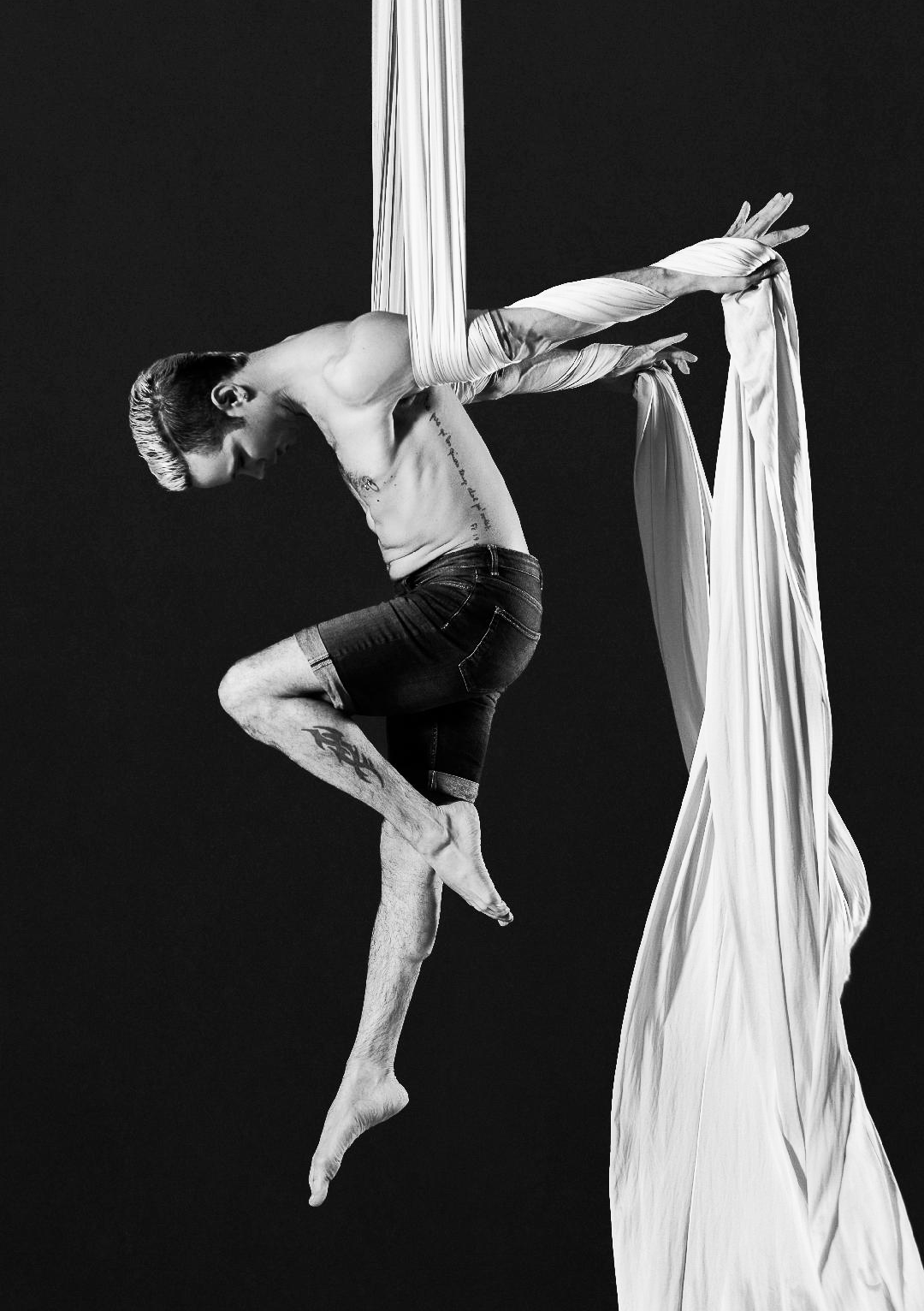 John Hernandez is an accomplished aerialist based out of the Pacific Northwest. He started his aerial training in 2007. His main focus to Aerial Silks and Straps. In 2009, He completed a certification program in Fitness Technology focusing on Movement Analysis, Class Management and Exercise Physiology. His talents have been shown in Night Flight’s annual Halloween Shows: Fright Night, Portland’s Vampire Masquerade Ball, Portland’s Umbrella Festival, Sir Cupcakes Queer Circus, Prismatic, Whoopee Live, and the Spokane Symphony. In addition to performing, John has spent most of his time developing his skills as an instructor, where he focuses on students establishing a good foundation and fundamental techniques, working on step by step progressions, strength and confidence building. 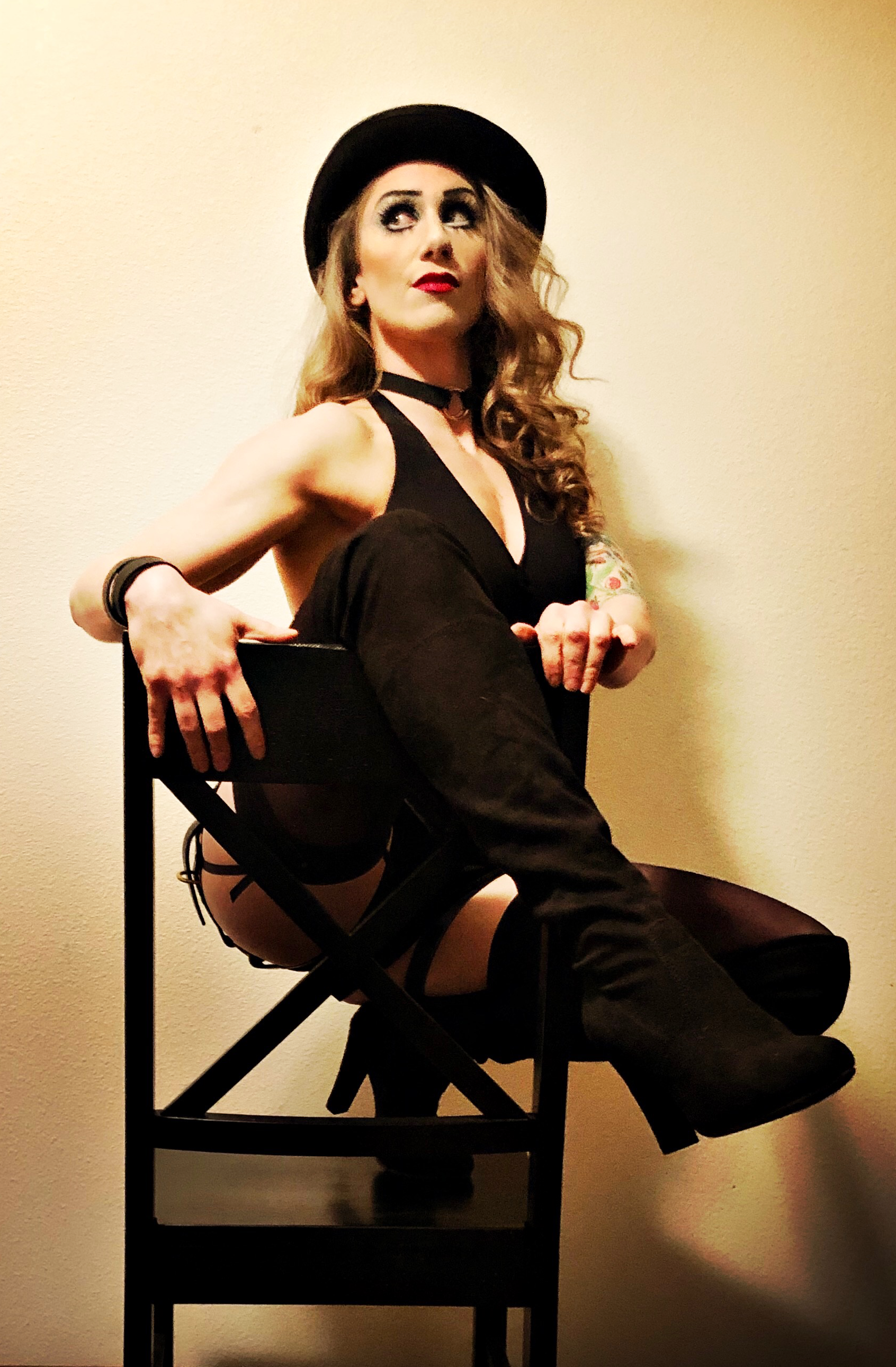 Like so many others, Chalese Marie found her voice through movement and dance. She began teaching and choreographing hip-hop, jazz and contemporary at a competitive dance studio at the age of 18. In 2006, she began her pole dancing journey. A chiropractor by day and dance instructor in her free time, she enjoys sharing her unabashedly sexy style while integrating anatomy, biomechanics, and booty shaking into her teaching. As a performer, she is inspired by her love of burlesque, exotic movement and always seeks to use her musicality to tell a story. Chalese began competing in the 2010 USPDF West Coast Regional competition. In 2012, she received her Pro card by placing 1st in the compulsory round at the USPDF National Championship. Earlier that year, she placed 3rd at PSO Pacific Pole Championships, and she went on n to compete at the 2013 PSO national competition. In 2015 she choreographed and performed in the Miss Pole Dance America in the group division with Thigh Highs and Heels. In Night Flight shows, she has been creating, directing and performing chair dance routines since 2013. 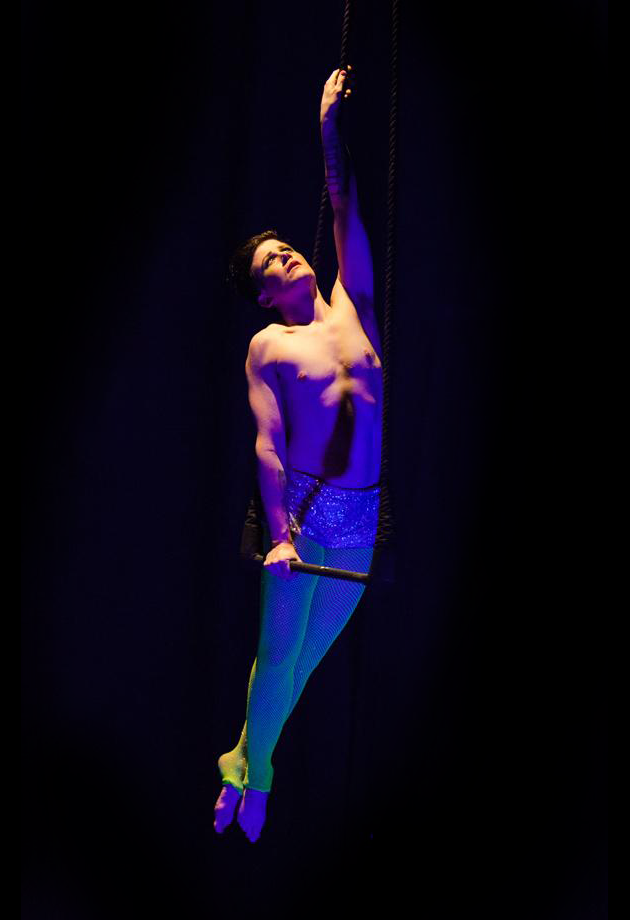 Jack holds a BFA in Theater and Original Works from Cornish College, where he also studied clowning. Clowning lead to the whole gamut of Circus Arts! As a performer Jack has toured nationally with DoJump!, and all along the West Coast with his own blend of Clowning and Aerial dance, including the National Queer Arts fest in San Francisco. As a director Jack has been making original work with youth and adults for 10+ years. In 2014, Jack created his very own circus, Sir Cupcake’s Queer Circus, a professional circus which celebrates transgender and queer circus artists. As a teacher Jack is a master at breaking down skills so they are easy to learn, and so that anyone can learn a little circus! Jack believes firmly in the power of play, focus and hard work to make innovative circus theatre that can lift up an entire community.

Amaya is a multidisciplinary circus artist with a passion for art, life, social justice and human connection. Amaya has travelled around the world studying, teaching and performing Circus, Dance, and Yoga since 2010. She has completed both professional training programs at The New England Center for Circus Arts (NECCA) as well as their aerial teacher training workshops. She is co-creator of the new contemporary circus theatre ensemble Show Tinder and Ash, which made its debut in Montreal in January 2015. As a performer, Amaya seeks to make art that matters in the world and inspires people. As a teacher, she seeks to uplift, empower, and facilitate experiences of joyful spontaneity and growth. 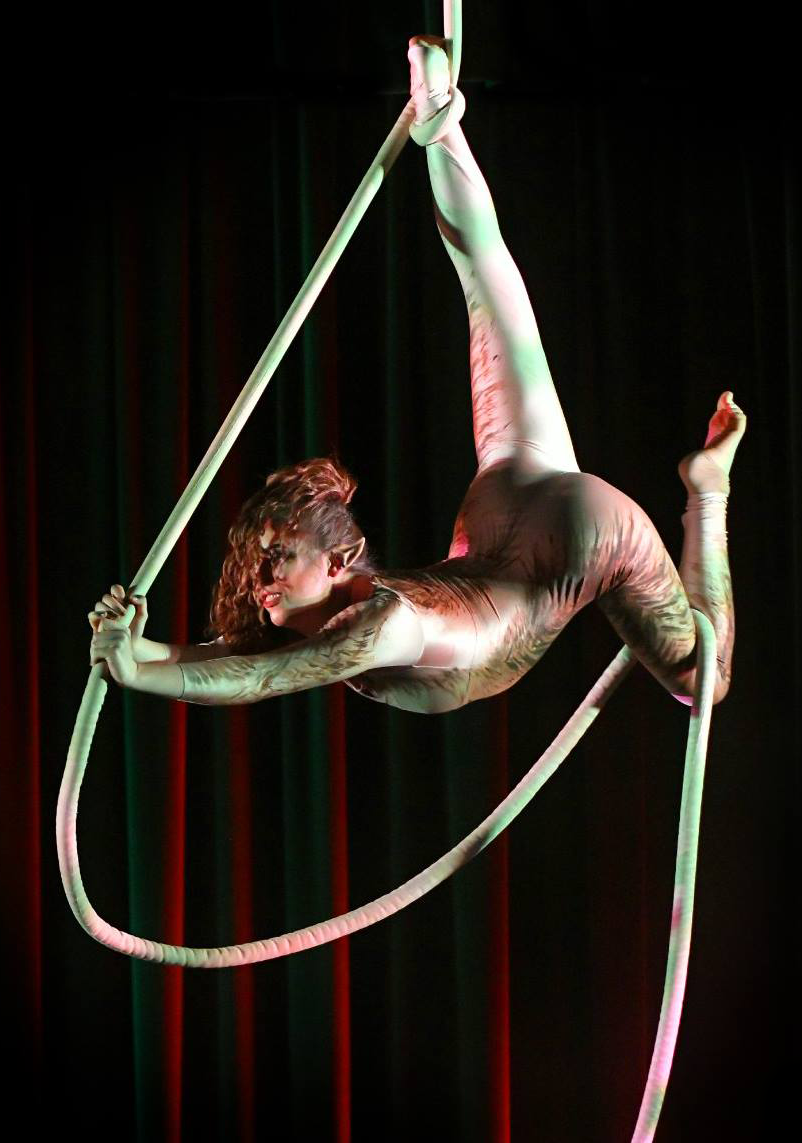 Captivated by the circus at an early age, Alison began her circus training with preschool classes at Acrosports in San Francisco. Spending most of her life surrounded by inspiring people and immersed in the circus world Alison has learned a lot about acrobatics, dance, juggling, contortion, clowning and aerial arts. She has trained at a number of schools around the United States, Canada, Switzerland and France. Most notably the Mongolian Contortion Center in San Francisco and Kinetic Theory in Los Angeles. She also studied Psychology and Kinesiology and graduated Occidental College. Alison loves to share her skills with audiences and students. 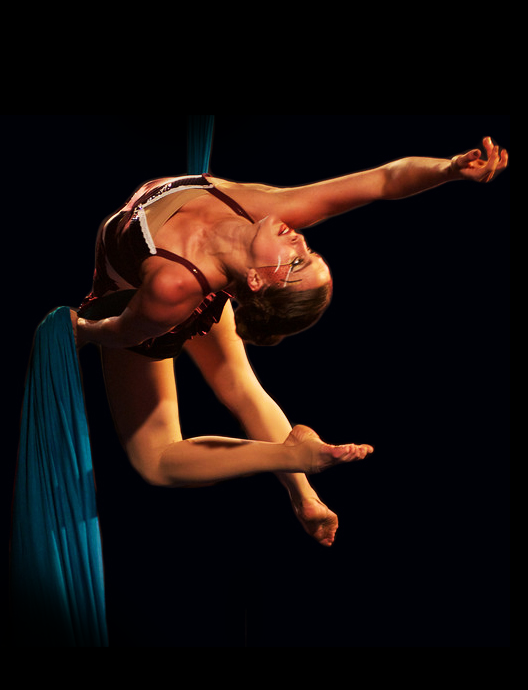 Kerri Jonquil has a long history of exploring various dance styles. From falling in love with belly dancing at age 6, to directing her high school’s performing modern dance program, to performing in U of O dance department productions and touring locally with Dance Africa, to finally discovering aerial arts in 2011. She found aerial acrobatics to be brilliant combination of her dance background and gymnastics abilities. After starting her aerial training in Portland, OR with Night Flight, she soon embarked on a rigorous professional training program at the acclaimed New England Center for Circus Arts in Brattleboro, VT.

Nami is a QPOC multidisciplinary artist, with over 20 years of aerial experience.
In 2007 Nami graduated from NICA (National Institute of Circus Arts) in Melbourne, Australia where she received her B.A. in Circus Arts with specialties in swinging trapeze and handstand tap dancing. She has toured the world as company member of Australia's Strange Fruit; Performing aerial work, choreographing and directing site specific works. Career highlights include the Sochi Olympics, London Olympics, 2012 World Expo, Marina Bay Sands Singapore, Santiago A Mil International Festival Chile, Kotari Anniversary Jaipur India, Commonwealth Games AU, 2015 Sgizet Festival Budapest and Chinese New Year celebrations Malaysia. She has also toured her solo trapeze work with the International Ballet Theatre. In 2016 Nami retired from performing, but periodically does a full face of stage makeup just out of habit. She is honored to join the coaching family at Night Flight. 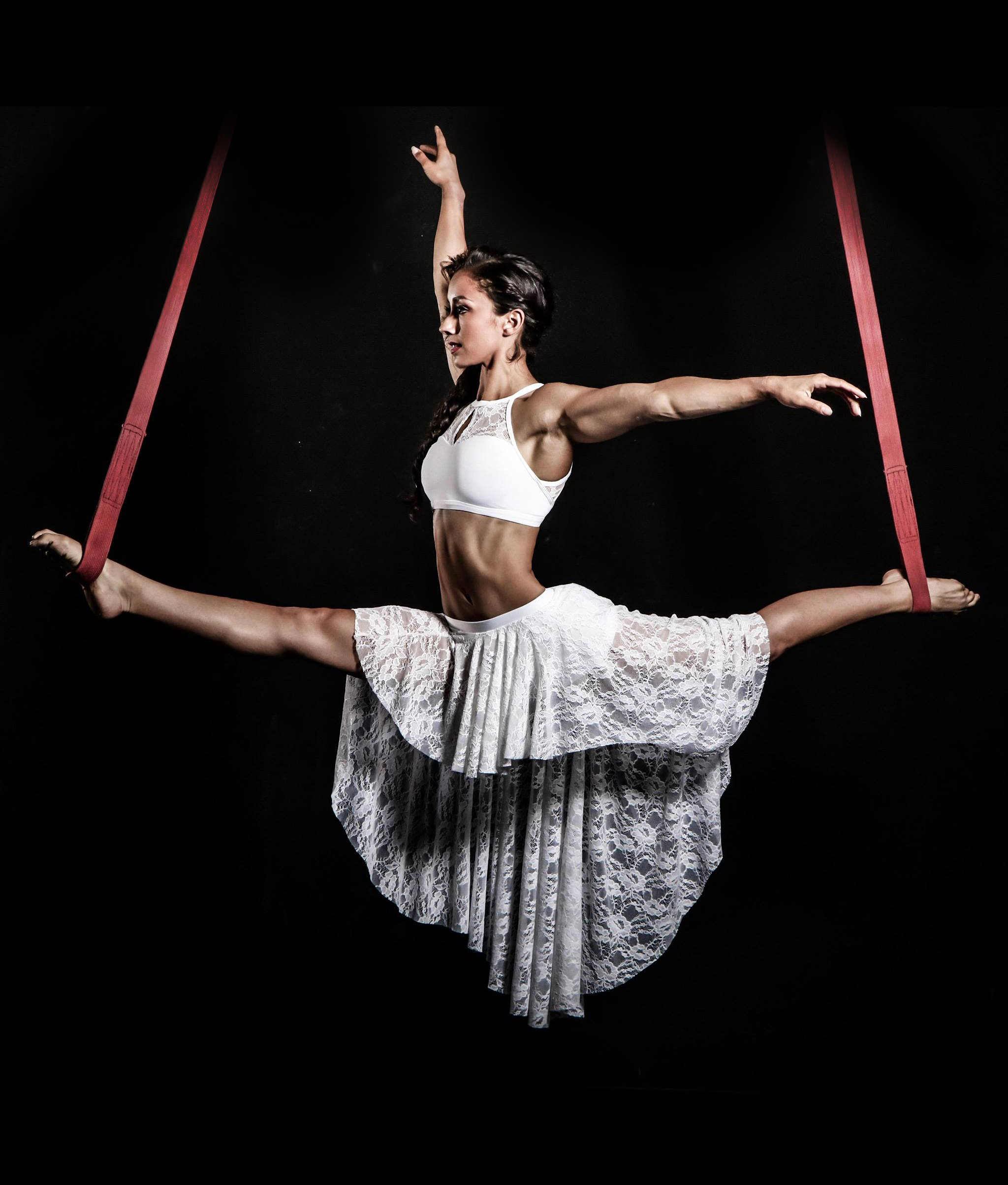 Paulina was a competitive karate athlete and studied martial arts as a child. She later discovered her passion for dance and has performed and competed in dance for many years. Paulina eventually became an aerialist and has mastered multiple apparatuses (including some unique and invented ones) and has a strong sense for combining intentional movement and dance with high level technical skills. She specializes in silks and straps.

Ashley comes to us with a lifetime of movement study featuring 15+ years of formal dance training in ballet, modern, jazz, hip-hop, & swing, and has been dancing semi-professionally for over a decade. In youth she competed, choreographed, & coached both competitive cheerleading & dance teams. Ashley's Aerial and Circus background includes training with Night Flight, New England Center for Circus Arts in Vermont & Stefan Furst. Performing is her true love, while inspiring others to overcome obstacles and do the impossible is her paramount mission in life.

Emily took her first aerial class at Night Flight in 2012 and has been enamored with aerial ever since. She began performing in Night Flight’s student shows before performing in Fright Night and Flying Fruitcake, as well as other local productions. In 2019 Emily began teaching at Night Flight and loves coaching students beginning or continuing their aerial journey. She enjoys training and teaching trapeze, lyra, silks, as well as training duo lyra with her aerial partner.

Katie fell head-over-heels in love with aerial silks in Cork, Ireland in the winter of 2011. She worked part-time on a farm, and often slept on a pile of crash mats, on the floor of the instructor’s apartment, to stay and train with The Flying Dance Company. Maybe she overstayed a tourist visa. Who’s to say? In Portland, she trained with A-WOL Aerial Dance Collective’s FlyCo, and with Night Flight. She performs burlesque chair dance with Wolf Coven Dance, and Lyra with duo HεxAppεal. Performing with Night Flight has been an unbelievable dream come true! She is currently making use of a ridiculous, extensive costume collection, while training with her cat, in a basement in NE Portland. Stay tuned!